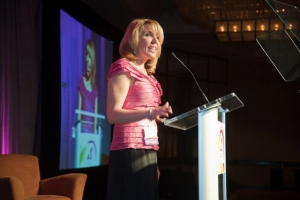 As Founder of Non Profit AMP10x / President of Ubee Interactive Maria Popo was so interesting to listen to.

The way she carried herself, the way she spoke and was so corporately polished was impressive. Even more impressive was the way she was willing to share her experience and expertise for those new young females coming up in business today. Maria is the only female officer of a Taiwanese based technology company. That alone is amazing.

The only techie on the panel, Maria had numerous interactions in the typically male dominated IT industry. She is a proponent of women learning to code. Clients, suppliers, manufacturers, employees are so used to dealing with a male boss, that she had several instances of having to utilize a new strategy in dealing with the male dominated marketplace – yet you can see she is the boss.

She recently climbed Mount Kilimanjaro in Africa. It was her first real climb and the first time she ever slept in a tent but had been invited by women she admires. She learned some great lessons (here is her blog http://www.huffingtonpost.com/maria-popo/eight-things-i-learned-fr_b_9751502.html) but the one I liked the best is this:
“Moral of the story: You don’t have to be the best to inspire others. You inspire them through your understanding, authenticity, laughter and collaboration towards the common goal.” Sounds like something we can do every day.

She has now founded a non-profit AMP10x whose “mission is to customize learning paths and eliminate boundaries”. Technology was not a traditional path when I was in school – and yet today while I don’t code, part of my work that I love is I can act as a translator between the techies that do code – and my clients.

Her recommendation – “moonshot goals”! Set really high goals – you never know, you might just reach them!